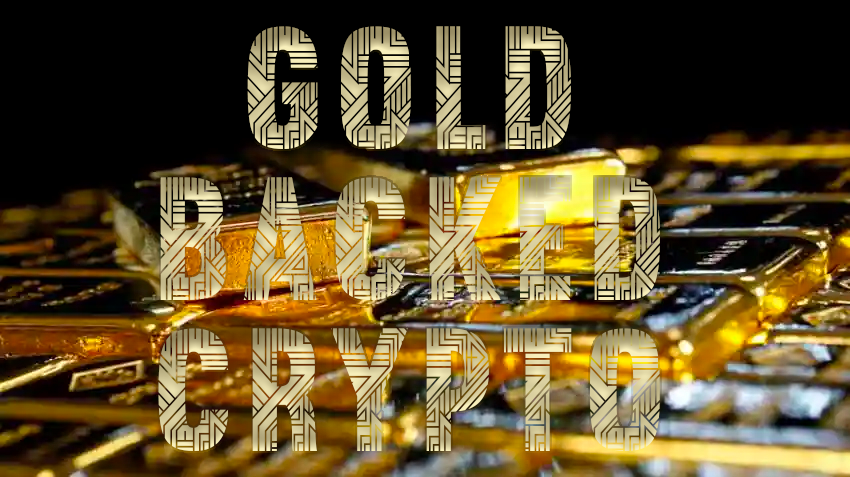 by Edmund O'Connell on Sep 3

The last few years have seen the creation of numerous blockchain projects claiming to have tokens backed by physical gold. By our reckoning over 100 have thrown their hat into the ring although probably close to half of these have folded, appear inactive, never reached critical mass or simply ran afoul of the regulators.

In this article we list our pick of the top 10 Gold Backed Crypto Tokens in 2022 in reverse order of their market cap. At this point of time PAX Gold and Tether Gold have carved out the lion’s share of the market having between them issued over a billion USD worth of tokens.

The other market players are relative minnows — but the game changes fast and innovation in this space can genuinely disrupt.

The undisputed leader in gold backed crypto tokens is PAX Gold. Launched in Q3 2019 by New York based trust company Paxos Standard, Pax Gold is an Ethereum-based ECR-20 token stablecoin pegged to the price of gold. Each PAXG token represents one troy ounce of a specific bar of gold stored in Brink’s vaults, one of the approved storage facilities of the London Bullion Market Association.

The price parity is maintained by the PAXG token or tokens being burned every time there is a redemption for the gold they represent. Paxos itself is fully regulated by the New York Financial Services Department with customer assets ring fenced completely from company assets.

Paxos itself is a blockchain solutions giant, providing a realm of services including custody, trade, brokerage, asset tokenisation, and settlement for enterprise clients and tier 1 financial institutions and crypto exchanges.

Gold reserves are held in Swiss vaults with each XAUt representing ownership of one fine troy ounce of physical gold on a specific gold bar. Holders can identify the details of the specific gold bar associated with their address via an interface on their website.

The fractionalisation of XAUt tokens is possible up to six decimal places (i.e. in increments as small as 0.000001 fine troy ounce). Tether Gold has managed to become the second largest gold backed token in under 2 years, no mean feat

Ainslie Wealth has been a leading Australian bullion dealer since 1974. Gold Standard (AUS) is an ERC-20 token tethered to the price of Gold. One AUS Token is equal to 1 Gram of pure Gold Bullion.

Each bullion bar is stored in the Reserve Vault in Brisbane, one of the most secure facilities in the country, insured and independently audited. The custodians are Ainslie Bullion. Gold Silver Standard partnered with Blockchain Australia - a blockchain development and consulting company on the development of the AUS token.

DGLD is a digital proof of ownership of LBMA allocated gold physically held in a Swiss vault launched in 2019 and was at time of launch the largest gold token on the market to date.

DGLD was developed by a consortium comprising MKS (Switzerland) SA, CoinShares, Europe’s Largest Digital Asset Manager, and Blockchain, a provider of cryptocurrency products including a crypto wallet and an exchange. Each DGLD is backed by 0.1 troy ounce of fine gold.

DGLD runs on the BTC chain by using Commerceblock’s sidechain. DGLD employs a combination of secure technologies such as Ocean1 (an open-source federated blockchain and sidechain platform) and Mainstay2 (a protocol for creating a cryptographic proof of immutability).

There is a wrapped version, Wrapped-DGLD (wDGLD), which is an ERC-20 token on the Ethereum blockchain that represents an equivalent unit of DGLD.

CGT is backed by 1 gram of pure physical gold and employs GramChain’s Proof of Reserve asset tracking system. Similar to PAXG and XAUt, CGT gold is allocated, with specific serialised bars backing the tokens in circulation.

However, CGT differs by allowing individual parcels of smaller bars to be used in the system. A variety of 100g, 1kg, and 400oz London Good Delivery bars back CGT. This inclusion of smaller bars increases the ease with which users can redeem their gold wheras most have minimum redemption weights of 1oz.

Bars that are in the system are stored as “parcels” and can be viewed on CACHE’s website, and individual bars stored at locations globally can be chosen for redemption. Redemptions can take place via taking delivery of parcels or by selling back bars to CACHE’s network of gold dealers.

CACHE Gold differs from the other projects detailed by allowing redemptions to be done via trusted third parties. In this way, CACHE redemptions are comparably more distributed. Allowing for dealers to bid for the CGT tokens to be redeemed also allows for decentralised price discovery to take place. This makes CACHE a radically more decentralised offering than most tokens.

CACHE has been granted license under the Precious Stones and Precious Metals Dealers (Prevention of Money Laundering and Terrorism Financing) Act (PSPM Act), passed by the Singapore Parliament in February 2019.

CACHE Gold is an ERC20 token on the Ethereum blockchain.

AurusGOLD (AWG) is a gold-backed stablecoin on the Ethereum blockchain that is minted by a network of esteemed traders from the traditional gold market.

Each AWG token is 1:1 collateralised by, and redeemable for 1 gram of 99.99% LBMA-accredited gold, stored in fully audited and insured vaults. AWG is minted by gold traders that can arbitrage between the AWG and bullion gold markets, keeping the price of AWG in line with spot fold price.

Aurus V2, a recently launched protocol overhaul, enables the activation of the Aurus Reward-Sharing Mechanism, which empowers the holders of the AurusDeFi (AWX) token with the revolutionary opportunity to earn passive yield paid in Gold, Silver and Platinum in DeFi.

Unfortunately, the AurusGold token trades in low volume compared to other gold-backed tokens, so it is unclear if the market is receptive to this project’s proposition. We are gunning for AurusGold as the ability to earn yield on a gold token without leaving the token’s ecosystem is groundbreaking.

Launched in October 2018, Perth Mint Gold Token (PMGT) is developed and issued by Trovio, a digital asset infrastructure solution provider and was behind DigiCash, an eMoney pioneer in the early 1990s.

An ERC-20 token, each PMGT unit represents one fine troy ounce of physical gold, securely stored in the central bank grade vaults of the Perth Mint. Each PMGT can be verified in real-time against the balance of GoldPass accounts published by the Perth Mint.

The weight and purity of every ounce of gold anchoring PMGT is assured by the Mint’s sovereign owner, the Government of Western Australia. This makes PMGT the first government guaranteed public blockchain token.

An Australian start-up, Meld Gold, has partnered with Algorand, a blockchain protocol company to successfully establish a decentralised gold token. It is the only offering on this list which is not deployed on Ethereum mainnet.

Leveraging the Algorand’s Standard Asset core functionality, Meld tokenises digital gold in the form of a Meld Digital Gold Certificate. These tokens, which are equal in value to one gram of physical gold, will be supported by the Algorand Wallet.

Algorand is a fascinating protocol which has managed to find an approach that claims to solve the blockchain trilemma supposedly without any compromise.

The so-called “blockchain trilemma” in which the three key objectives — security, scalability, and decentralization — can’t be fully achieved without sacrificing at least one of them, was one of the main challenges during the blockchain’s first decade. The solution was invented by MIT Professor and Algorand founder Silvio Micali, who is a leading figure in cryptography and game theory.

First to market with an asset-backed gold token was Singapore based DigixGlobal which raised 500,000 ETH from an ICO in Spring 2016. The DGX token represents 1 gram of gold and is backed on a 1:1 ratio and has a market cap of US$ 800k. The gold is stored in both Singapore and Canada.

DGX coins are created through a protocol it terms Proof of Asset (PoA). PoA is designed to assure that sufficient gold has been acquired and stored against each DGX and the certification is stored on the Ethereum blockchain.

The main nodes that process the PoA are the vendor which provides the gold, the third-party auditor which is hired to check the quality and quantity of the stored gold, and the vault.

When depositing gold, a PoA Asset Card is created which stores the chain of custody (vendor, auditor, and custodian vault) in digital signatures. PoA cards which evidence details of the stored gold, including the timestamp of the card, the gold bar serial number, audit documentation and the chain of custody digital signatures. It is stored on the Ethereum blockchain.

Digix is also issuing both a security token (DGD) and commodity tokens (DGX), which would put them under the jurisdiction of both the Securities and Exchange Commission and the Commodity Futures Trading Commission.

DigixGlobal’s future is alas uncertain. The company suspended operations back in January 2022 in order to focus on reviewing the license requirements under the Singapore Payment Services Act and announced that it would not be taking any more transactions. The website currently displays a customer service notice with a link to their help centre.

We hope this pioneer in the gold backed crypto space is able to satisfy the Singapore regulators and get back to focussing on what they do best.

AABBG is one of the recent entries in the gold-pegged cryptocurrency market (and the last one on our list) having launched on March 2021 by Asia Broadband, Inc. (OTC: AABB) using $30 million of its gold bullion as collateral.

It comes with some innovative differences from other gold backed tokens. It follows a mine-to-token gold-backed paradigm. It verifies physical gold assets that back the AABBD token 100% from the company’s gold mining segment.

The token price is pegged at a 0.1-gram price of gold. The token will continue to be backed 100% by additional physical gold acquired from future mining production, gold purchased from cash reserves or credit. This vertical integration of Mine-to-Token gold-backing in what makes AABB unique.

Established in 1996, Asia Broadband, Inc. is a high-margin resource company focused on the production, supply, and sale of precious and base metals to primarily Asian markets.

Purchasing can only be conducted via the proprietary AABB exchange and from the AABB wallet.

This concludes our top 10 picks for the primary gold backed crypto token players. For a fully comprehensive list James Clark at Goldscape produced this list back in March 2022.